New results from Roy Morgan show that customer satisfaction with electricity providers in the 12 months to May 2018 was only 56.6%, down from 60.4% in the 12 months to May 2017. NPS® for electricity providers is also now at a very low minus 47.6.  These low satisfaction and NPS levels show why 2.1 million customers are considering switching over the next 12 months.

These are the latest findings from Roy Morgan’s ‘Customer Satisfaction – Electricity Providers Report’ which is based on in-depth personal interviews conducted face-to-face with over 50,000 Australians per annum in their own homes, including over 14,000 interviews with people who rated their satisfaction with their electricity connection.

Red Energy with a satisfaction rating of 70.0% remains in top position among the largest providers, narrowly ahead of Simply Energy (65.0%) and Energy Australia (64.4%). There is a wide range of satisfaction levels across the major players, with Ergon Energy on 53.7% being currently the lowest performer. 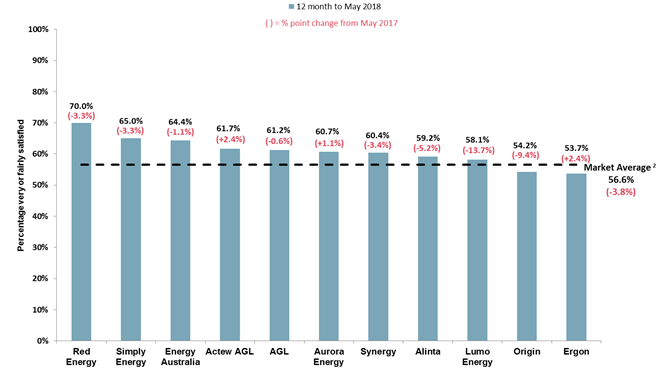 With satisfaction declining by 3.8% points across the total market over the last year, it is not surprising that declines in satisfaction were seen across nearly all the major players with the exception of Actew AGL which improved by 2.4% points, Ergon up 2.4% points, and Aurora Energy (up 1.1% points).

The following chart shows that the level of satisfaction across the five point scale has a direct impact on switching intentions. For example, nearly half (43.7%) of the customers who are ‘very dissatisfied’ with their electricity provider say that they are either ‘very likely’ or ‘fairly likely’ to switch companies in the next 12 months. Even more than a third (36.0%) of those who are ‘fairly dissatisfied’ say they are likely to switch in the next 12 months. 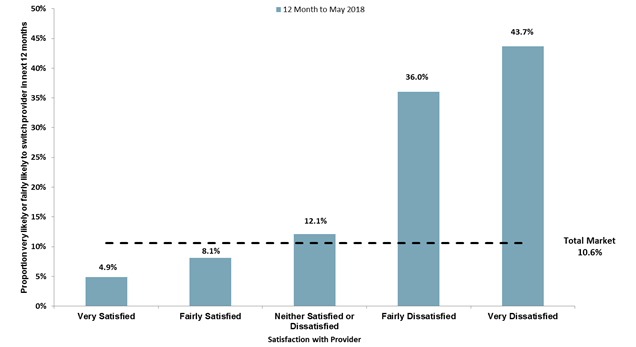 “The decline in satisfaction with electricity providers over the last year, down to only 56.6% is of major concern because it is well below the level of 73.5% when this survey began in 2009. It is likely that the most recent decline is a result of the continual negative news regarding energy shortages, blackouts, reliability, price increases and general lack of confidence in the long term direction the government is taking to tackle these issues.

“It is important to note that although most of the major electricity providers are operating in a similar negative environment, the fact that there are major differences in satisfaction show that there are lesson to be learnt by examining what the better performers are doing right.

“The data used here is only a small part of the extensive data that we have available on all major utilities. To find out more, ask Roy Morgan.”

The state of clean energy: How are the states are tracking on renewables?
Draft AER determination benefits Endeavour Energy consumers
Comment