New results from Roy Morgan show that customer satisfaction with gas providers in the 12 months to June 2018 was only 61.8%, down from 66.1% in the 12 months to June 2017. NPS® for gas providers is also at a very low minus 49.4. These low satisfaction and NPS levels account for why 1.5 million gas customers are considering switching over the next 12 months.

These are the latest findings from Roy Morgan’s ‘Customer Satisfaction-Gas Providers Report’, which is based on in-depth personal interviews conducted face-to-face with over 50,000 Australians per annum in their own homes, including over 9,500 interviews with people who rated their satisfaction with their gas provider.

Kleenheat has the highest customer satisfaction of the ten largest gas providers with 70.2%, followed by Elgas on 68.1% and Actew AGL (64.6%). There is a wide range of satisfaction levels across the major players, with Lumo Energy on 56.6% being currently the lowest performer.

With satisfaction declining by 4.3% points across the total market over the last year, it is not surprising that declines in satisfaction were seen across nearly all the major players with the exception of Elgas which improved by 5.7% points and ActewAGL up 5.2% points. Both of the largest players showed declines in satisfaction, with AGL down 4.2% points (to 61.4%) and Origin down 0.5% points (to 61.6%), leaving them a little below the market average of 61.8%. 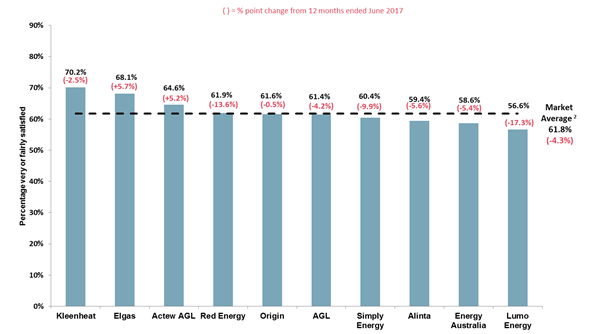 “The decline in satisfaction with gas providers over the last year, down to 61.8% from 66.1% only 12 months ago, is a dramatic drop and a major concern. It is likely that most of this recent decline is a result of the continual negative news regarding issues relating to both gas and electricity, covering areas such as price increases, shortages, reliability of supply and the general lack of confidence in the long term direction the government is taking to tackle these issues.

“It is important to note that although this industry is operating in a difficult and uncertain environment, the fact that there are major differences in satisfaction among the major players shows that there are lessons to be learnt from the better performers.

“The data used here is only a small part of the extensive and long term data that we have on gas and other utilities. To find out more, ask Roy Morgan.”

Construction in full swing at $21B coal project despite COVID

Contract extended for metal mine in northwest Qld